I first wrote about the T2 instances in the summer of 2014, and talked about how many workloads have a modest demand for continuous compute power and an occasional need for a lot more. This model resonated with our customers; the T2 instances are very popular and are now used to host microservices, low-latency interactive applications, virtual desktops, build & staging environments, prototypes, and the like.

New T2 Unlimited
Today we are extending the burst model that we pioneered with the T2, giving you the ability to sustain high CPU performance over any desired time frame while still keeping your costs as low as possible. You simply enable this feature when you launch your instance; you can also enable it for an instance that is already running. The hourly T2 instance price covers all interim spikes in usage if the average CPU utilization is lower than the baseline over a 24-hour window. There’s a small hourly charge if the instance runs at higher CPU utilization for a prolonged period of time. For example, if you run a t2.micro instance at an average of 15% utilization (5% above the baseline) for 24 hours you will be charged an additional 6 cents (5 cents per vCPU-hour * 1 vCPU * 5% * 24 hours).

To launch a T2 Unlimited instance from the EC2 Console, select any T2 instance and then click on Enable next to T2 Unlimited: 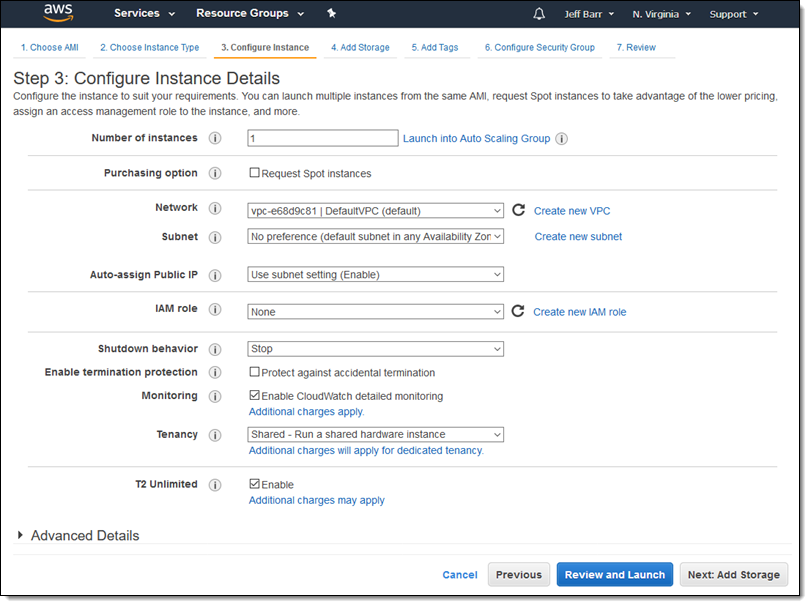 And here’s how to switch a running instance from T2 Standard to T2 Unlimited: 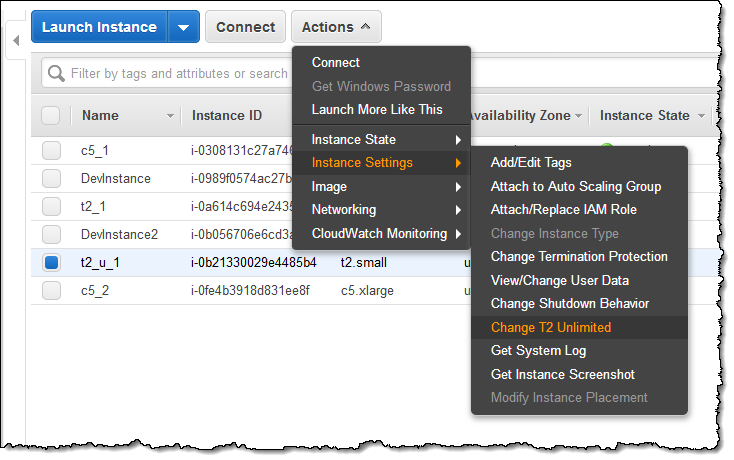 Behind the Scenes
As I described in my original post, each T2 instance accumulates CPU Credits as it runs and consumes them while it is running at full-core speed, decelerating to a baseline level when the supply of Credits is exhausted. T2 Unlimited instances have the ability to borrow an entire day’s worth of future credits, allowing them to perform additional bursting. This borrowing is tracked by the new CPUSurplusCreditBalance CloudWatch metric. When this balance rises to the level where it represents an entire day’s worth of future credits, the instance continues to deliver full-core performance, charged at the rate of $0.05 per vCPU per hour for Linux and $0.096 for Windows. These charged surplus credits are tracked by the new CPUSurplusCreditsCharged metric. You will be charged on a per-millisecond basis for partial hours of bursting (further reducing your costs) if you exhaust your surplus late in a given hour.

The charge for any remaining CPUSurplusCreditBalance is processed when the instance is terminated or configured as a T2 Standard. Any accumulated CPUCreditBalance carries over during the transition to T2 Standard.

The T2 Unlimited model is designed to spare you the trouble of watching the CloudWatch metrics, but (if you are like me) you will do it anyway. Let’s take a quick look at a t2.nano and watch the credits over time. First, CPU utilization grows to 100% and the instance begins to consume 5 credits every 5 minutes (one credit is equivalent to a VCPU-minute):

Once the surplus credit balance hits 72, there’s nothing more to borrow from the future, and any further CPU usage is charged at the end of the hour, tracked with the CPUSurplusCreditsCharged metric. The instance consumes 5 credits every 5 minutes and earns 0.25, resulting in a net charge of 4.75 VCPU-minutes for each 5 minutes of bursting: