Encryption of Data in Transit for Amazon EFS

Amazon Elastic File System was designed to be the file system of choice for cloud-native applications that require shared access to file-based storage. We launched EFS in mid-2016 and have added several important features since then including on-premises access via Direct Connect and encryption of data at rest. We have also made EFS available in additional AWS Regions, most recently US West (Northern California). As was the case with EFS itself, these enhancements were made in response to customer feedback, and reflect our desire to serve an ever-widening customer base.

In order to make it easy for you to implement encryption in transit, we are also releasing an EFS mount helper. The helper (available in source code and RPM form) takes care of setting up a TLS tunnel to EFS, and also allows you to mount file systems by ID. The two features are independent; you can use the helper to mount file systems by ID even if you don’t make use of encryption in transit. The helper also supplies a recommended set of default options to the actual mount command.

Setting up Encryption
I start by installing the EFS mount helper on my Amazon Linux instance:

Next, I visit the EFS Console and capture the file system ID: 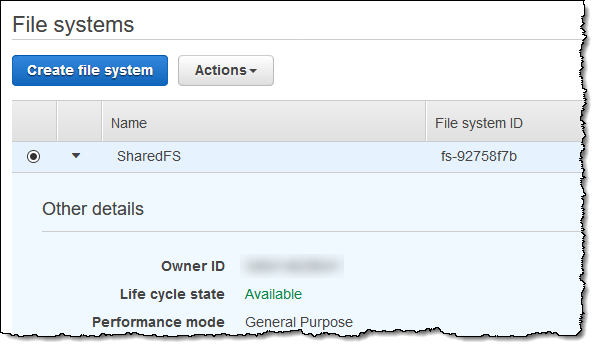 Then I specify the ID (and the TLS option) to mount the file system:

And that’s it! The encryption is transparent and has an almost negligible impact on data transfer speed.

Available Now
You can start using encryption in transit today in all AWS Regions where EFS is available.

The mount helper is available for Amazon Linux. If you are running another distribution of Linux you will need to clone the GitHub repo and build your own RPM, as described in the README.